Today we are going to examine another deadly storm.  Very different from the tornado…. The hurricane. 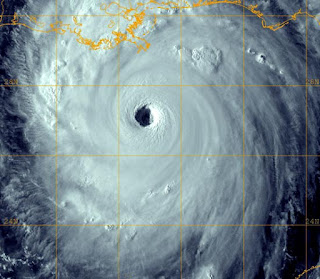 A hurricane is huge.  Unlike the tornado, a hurricane can measure 600-700 miles in diameter.  Winds near the center of the storm can reach speeds up to 200 miles an hour.  Whereas a tornado lives on land, a hurricane can only form and survive over warm ocean waters.  In the center of a hurricane is an eye.  In the eye, winds are calm or very light, the sky above is clear.  The diameter of the eye can vary greatly, sometimes measuring only a few miles in diameter to as much as 30-40 miles.  While the winds around the eye swirl at 75 to 200 miles an hour, the storm itself usually has a forward speed of only 12-25 miles an hour. 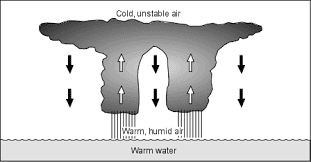 So, let’s see how these storms form, when and where.  For a hurricane to form, it must be, of course, over the ocean.  The ocean water must be at least 80 degrees Fahrenheit but it should be warmer.  Hurricanes cannot form on the equator because there is no Coriolis force at the equator. It is the Coriolis force that causes the spin in the hurricane. As a result, hurricanes generally form 5-15 degrees north or south latitude from the equator. 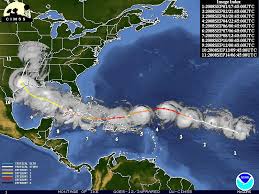 Let’s go through the stages in development of a hurricane.  In the Atlantic, these storms usually start out as a weak low pressure system that drifts westward with the trade winds.  We call this a tropical wave. After a few days, this area gets better organized, thunderstorms containing heavy rains and gusty winds expand.  We now call this area a tropical depression.  As further development takes place and the winds exceed 38 miles an hour, we now label this as a tropical storm.  If this area continues to strengthen, it will be upgraded to a hurricane when the winds reach 75 miles an hour.  Hurricanes can and do continue to strengthen.  There is a scale to measure the strength of a hurricane. It is called the Saffir-Simpson hurricane scale.  The weakest hurricane, a category 1 hurricane, has winds between 75 and 95 miles per hour. A category 2 hurricane has winds of 96 to 110 mph.  Category 3 exhibits winds of 111 to 130 mph.  These storms cause extensive damage.  When the winds reach speeds of 131 to 155 mph, the storm is deemed a category 4 hurricane and the damage is extreme.  Hurricanes with winds over 155 miles per hour are labeled category 5 hurricanes.  These storms do catastrophic damage. 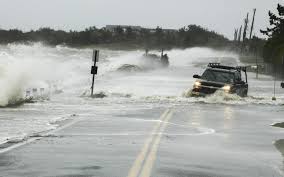 One might think most lives are lost during hurricanes because of the strong winds.  While some lives may be lost as a result of winds, it is water associated with hurricanes that cause the most deaths. As winds spiral around the storm they push water into a mound at the storms center.  As the storm’s center approaches land, it is this mound of water that rushes ashore causing devastating floods.  A surge of 18-20 ft. of water is not out of the question.  This wall of water can knock down buildings, and sweep people out to sea. It is called the storm surge; it is the real killer.  And lately, as scientists delve deeper into the nature of hurricanes, they are finding more and more unusual occurrences.  For example, scientists are now discovering that when hurricanes come ashore, they spawn tornadoes.  Sometimes many, many tornadoes.  We know the damage tornadoes can do.  So, in addition to the flooding and wind damage normally associated with hurricanes, we can now add tornado damage to hurricanes. 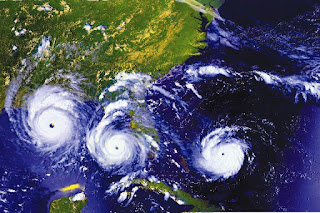 In order to identify hurricanes better, in 1953, the United States weather bureau began naming hurricanes. They gave hurricanes women’s names.  Until 1979, only women’s names were used.  In 1980, they decided to alternate men’s and women’s names.  If a hurricane becomes infamous causing great damage and loss of life, that name is permanently retired, never of course, to be used again.