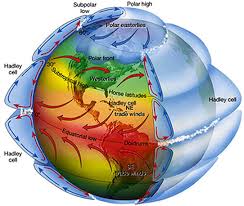 When we talked about clouds and precipitation. We mentioned that when air is forced to rise, it expands and cools and water vapor is squeezed out of the air by the process of condensation. The moisture could take the form of dew, frost, fog, or precipitation.  We mentioned various places where air is forced to rise such as mountains, along fronts and in storms.  Another place air is forced to rise is in the doldrums.  This is an area of low pressure located near the equator of the earth. The northeast trade winds in the northern hemisphere converge with the southeast trades of the southern hemisphere.  Where these winds come together, the air is forced to rise. As a result, this is an area of heavy rainfall day after day.  This Doldrum-belt does shift during the year.  In the summertime it migrates about five degrees north of the equator.  During the autumn and spring season it is located very close to the equator and in the wintertime it migrates south of the equator.
Just the opposite, the horse latitude belt is where the northeast trade winds originate. Air flows away from the horse latitude belt.  At the same time, the south-westerlies originate from the horse latitude belt and flow away from the area.  As air flows away from the horse latitude belt, air must descend to take the place of the departing surface air.  Air is sinking, thus warming and no clouds or precipitation occur.  The horse latitude belt is located about 30 degrees north and south of the equator.  For the most part, this part of the earth is void of clouds, wind and precipitation.  In the early days, explorers had to lighten the loads on their ships because there was no wind to push them along.  Everything had to go overboard, even the horses they brought along for transportation in the new world.  As a result, this area became known as the horse latitudes. 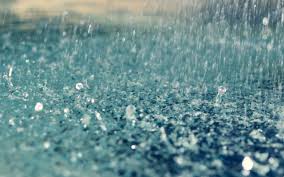 Up at 60 degrees north there is another low- pressure area like the doldrums.  Here we see the convergence of the prevailing southwesterlies and the polar northeasterlies.  Again, as they converge air is forced to rise and an area of clouds and precipitation are formed.  This area is called the subpolar low area.  What is important is this, where the air is forced to rise, clouds and precipitation prevails and where air is sinking, there is little in the way of clouds or precipitation.
Now that we know where and why
Precipitation occurs, let’s look at the different forms of precipitation.  First, there is rain. This is described as drops of water falling from clouds at least a few thousand feet above the ground.  Very fine drops, called drizzle, falls from lower clouds such as stratus clouds. The classic snowflake consists of a six-sided crystal.  At very low temperatures snow may take the form of ice needles.  Sleet or ice pellets are formed when raindrops fall through below-freezing layers of air, solidifying into pellets of clear ice. Freezing rain forms when drops of rain come in contact with below-freezing surfaces on the ground.  This condition, if prolonged, may create an ice storm, causing hazardous driving conditions along with severe damage to trees, shrubs, and telephone and electric wires.  Finally, hail can be described as alternating layers of snow and ice that resemble an onion in structure.  Hailstones, oddly enough, are usually associated with severe summer thunderstorms and are rarely experienced during the winter. 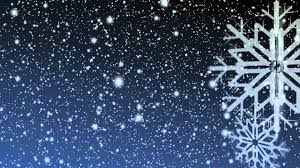 the atmosphere. If the clouds are located completely in the cold air (below 32 degrees) then the temperature of the dew point will be below freezing and snow forms. As snow falls through the air and hits the ground, it does not melt since the ground temperature is also below freezing.  The snow is said to stick.
If the clouds are located both in the cold air and the warm air, then raindrops are formed in the warm air while snow is formed in the cold air.  As the raindrops fall into the colder air below, they eventually freeze and form solid pellets of ice which we call sleet or ice pellets. These pellets reach the ground as sleet, which some people mistakenly call hail. So, where the cloud is located in both warm air and cold air, we get a mixture of snow and sleet. If the entire cloud exists in above freezing warm air, no snowflakes can form, only raindrops.  If, however, the cold air below is thick enough, rain drops could form pellets of ice and sleet would form, however, if the cold air below the clouds is extremely shallow, then the rain drops will remain rain drops until they actually hit the ground.  If the ground temperature is below 32 degrees, then the rain freezes on contact with the ground, forming freezing rain or glaze.
What forms of precipitation hits the ground if the entire cloud is located in the warm air (above 32 degrees) and the surface temperature is also above 32 degrees?
Posted by Gabe levinson at 9:54 AM