This week I would like to venture into a situation that can be very costly both in property and loss of life.   Let’s examine the tornado.  This is usually a rather small storm, but extremely violent. Tornadoes generally affect an area only, perhaps, a mile wide.  However, it can move along the earth for many miles, affecting all those located in its path.  Tornadoes usually develop from severe thunderstorms. Generally, the scenario goes like this.  Hot and humid air exists in the Gulf States.  Cold air comes racing south from Canada.  Meanwhile, dry air is filtering into the area from the west, coming down slope from the Rocky Mountains.  The mixture of hot moist air with cold dry air plus in infusion of air from the west makes the atmosphere extremely unstable.  First, the severe thunderstorm, then the spinning funnel appears.  Some funnels never touch the ground, others do. Much study is being devoted to the dreaded tornado.  Great advances have been made, but still much is unknown. 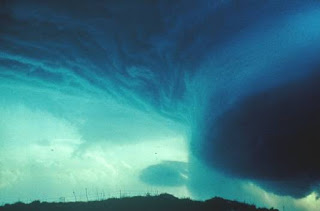 Now during the month of February tornadoes begin affecting the states bordering the Gulf of Mexico.  As March and April approach, tornadoes begin to develop in the Texas, Oklahoma, Nebraska area and surrounding states.  Come the months of May and June, it is common to see tornadoes ripping across the landscapes of Iowa, Missouri, and Minnesota, even the Dakotas.  It is safe to say, however, very few places in the United States never experience a tornado. 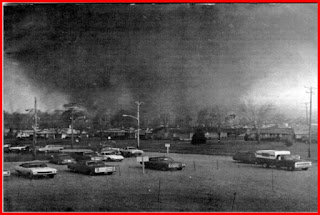 During the spring and summer, it is not out of the question that a tornado touches down in the northeast.  Unlike the tornadoes in the Gulf States and the mid west (tornado alley), tornadoes in the northeast are usually of very short duration.  Some funnels just skim the ground, other remain on the ground only for a few minutes.  Tornadoes out west, where the ground is flat, can stay alive for an hour or more, causing devastation everywhere in its path.  Some tornadoes travel for hundreds of miles, knocking down huge trees, telephone poles, wires, throwing cars and trucks around like they were toys, even flattening buildings. Many people living in areas that are prone to tornadoes construct storm cellars in order to survive. 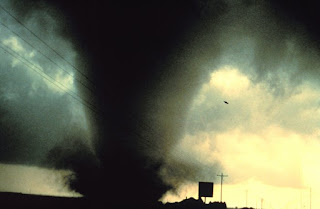 Stories about tornadoes are quite common. Unfortunately, many of them are true.  We hear about a baby being ripped from a mother’s arms and found a few blocks away with only a few scratches and bruises.  We hear of cars and huge trucks being carried high in the sky and being whirled around in the funnel, finally coming back down to earth as the tornado weakens.  One man went into his storm cellar and his dog was following.  As the tornado went overhead, the dog was sucked out of the cellar into the tornado.  The dog was never seen again. 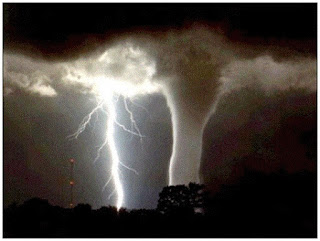 So what should you do if a tornado is heading for your area and you do not have a storm cellar?  Cars are not safe.  Holding on to a tree is no solution.  The best thing one can do is finding a structure.  If you are close to home, get into your house.  If you have a cellar, go down into the cellar and stay away from windows.  If your house has no cellar, and many do not, get to the center of the house …again, away from windows. If you can, get on the floor, perhaps under a bed.  Some have suggested get into the bathtub and if possible cover yourself with something to protect yourself from falling objects. Do not, I repeat, do not go outside to take pictures of the tornado.  Many a life has been lost doing that. 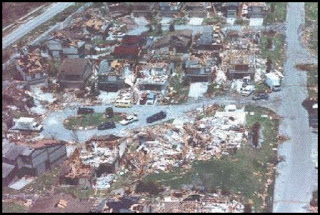 Next week I will discuss another killer storm, the dreaded hurricane. When does it occur? Where does it occur? And how does it usually kill.
Posted by Gabe levinson at 10:07 AM